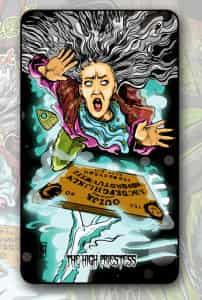 UPDATE II: A review on the Twisted Tarot Tales is coming in the first week of October 2016 as part of the Winter Wonderland of Extraordinary Tarot. Felt like the TTT was *the* best deck to kick-off such a theme 😉

UPDATE APRIL 24TH 2016:
Instead of Kickstarter the campaign will run on Indiegogo, starting tomorrow on April 25th. The makers of the deck have created a very informative website on Twisted Tarot Tales in case you want to see more.

I love a bit of controversy, so it is with pleasure I show you the sneak peek of the nearly finished The Twisted Tarot Tales deck. A deck that is all about horror comics and has shocked a few readers already. My take: even if you will never read with it, buy it as a collector’s deck!

I am anticipating my review there a bit. Who knows, I might come to a different conclusion. But I think not. James Battersby and his partner Christine are responsible for this ‘controversial’ deck. Not surprisingly because they have quite the reputation after their Cultural Revolution deck. (Although I never really understood why people had such an issue with that one either. It did not condone anything, it only showed). Yes, Twisted Tarot Tales definitely might not be to everyone’s taste, but within its genre it is definitely extremely well done and Waite-Smith readers probably wont have an issue to switch to this deck. And if you doubt my artistic judgement: Philo Barnhart, A Disney animator, who has worked on the Little Mermaid, Beauty and the Beast, Smurfs and others, has called this artwork “Exceptional” already.

Ghastly characters
The Twisted Tarot Tales is “filled with creepy clowns, mutated monsters, werewolves, crazy magicians, evil seductresses and a myriad of other ghastly characters. Add to that a mix of real world ecological problems like pollution, mutations, genetically modified food, nuclear disasters, you name it, we run the whole gamut,” according to Battersby, who was kind enough to explain the contents of his creation. 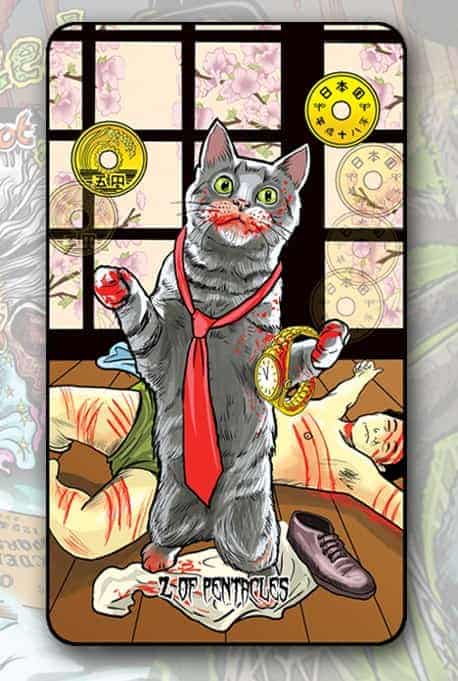 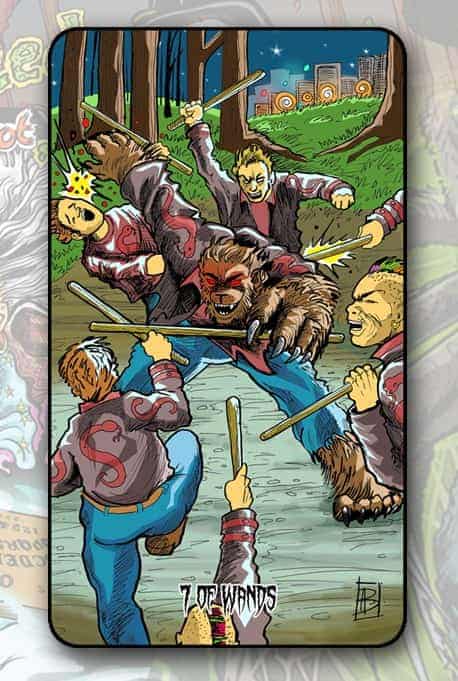 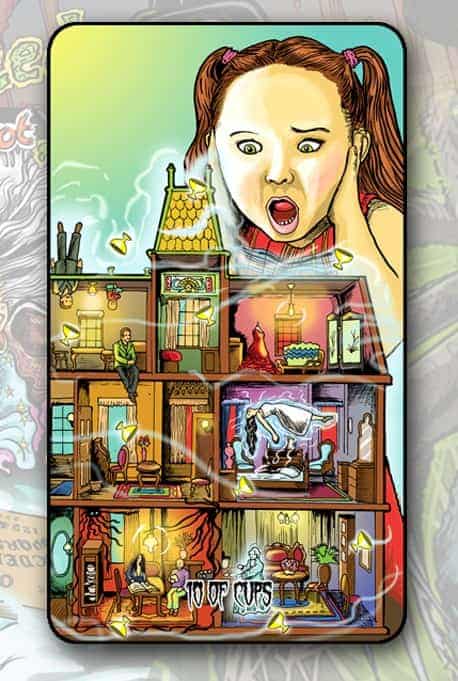 The deck is inspired by bronze age comics and each card is drawn with a pencil and inked by hand before coloring. This mimics a process similar to that of the artists of the bronze age.

Dark tarot alternative
The intention of the Twisted Tarot Tales deck is to bridge the gap between tarot and horror and to provide an alternative to readers who like ‘dark’ but not the dark that is currently filling the tarot landscape. Think vampires, witchy stuff and scary faeries. Battersby: “We wanted to create something fun, something eye catching, and I really feel that we’ve achieved this with our horror comic themed tarot.” 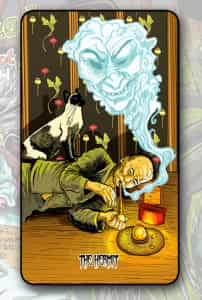 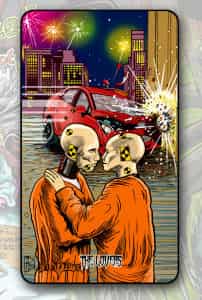 As you can see the deck is borderless (yay!) which in this case is extra welcome due to the vast amount of details. Colors are very vivid; true to the comic book style. The deck does have titles, which can come in handy with these new depictions. I don’t expect every possible querent/sitter to be happy if you drop this one on the reading table, nor do I expect every tarot reader to eagerly whip out their credit-cards. But it is definitely a very original deck. Like I said: a collector’s item. But personally I can’t wait -have you noticed?- to read with it.

Kickstarter soon!
A review will follow on these pages as soon as I have the deck. Are you getting enthusiastic as well? Then I have good news: the intended launch for the Kickstarter campaign (pending the Kickstarter review panel) for the Twisted Tarot Tales will be the 18th of April 2016. Next week!

For more information and to stay up-to-date you can also visit the Twisted Tarot Tales Facebook page.