Instagram is sometimes the best place to discover new art & divination work. For one, it told me that Bonefire Tarot artist Gabi Angus-West had just published an oracle with the rather curious name The Wyrd of Sarah Howard Oracle. Truly limited edition: 100 copies**. At the time of receiving my personal package (nr 17!) I exclaimed on Facebook: “It rarely happens that my heart beats faster from an oracle. Sure, most have gorgeous art, but true oracles that can replace my tarot decks for advice and divination? Exceptional. One where you immediately see this will be on top of the Oracle chain? Super rare! And I think I found one.”

I still agree. Hence this review. Despite its very limited edition, I still wanted to show this work. Also because Angus-West is working on new material and I feel that she weaves a story from deck to deck*. The Wyrd of Sarah Howard is an exceptional oracle, unlike others, and even includes a trifecta of sorts: keywords, minor arcana-like scenics and playing card inserts. I believe this could make ‘Sarah’ interesting to many who might have looked down upon oracle reading before (you know who you are). This is a deck that slowly divulges its secrets and offers some studying to boot. It’s more than uplifting messages or an addition to tarot. This is a stand-alone with surprising answers. So let’s get practical and look at the how, the why and all there is to write in a review.

Personal & Minor arcana
During her creative process she wrote some things on a forum: “(..) this deck is very personal, it is something I want to make and make with a sense of urgency. The Wyrd of Sarah Howard is supposed to open up themes of the evolution of the soul, continuity, custodianship and healing of old wounds.”

And I completely believe her: the ‘vibe’ of this deck is different. It feels more like a tarot deck in a way and ‘technically’ that is no wonder. The deck has ‘scenics’ fitting for the minor arcana, counts 4 suits with 56 cards in total and adds 3 bonus cards – one actually being a happy squirrel of sorts. I don’t see the mindfulness and gentle healing as with most oracles, nothing of the abstract art that is so common there. Sarah tells a story, shares her life and then gives you a deeper look into your pain and worries, yearnings and happiness. 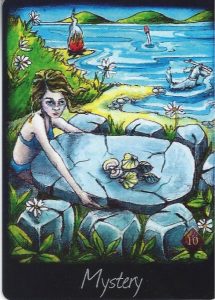 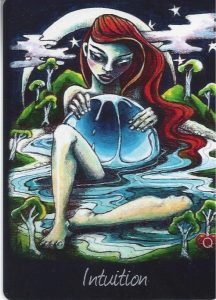 The Wyrd of Sarah Howard Oracle art wise is immediately recognizable for those who have or know of the Bonefire Tarot. Gabi Angus -West’ hand cannot be missed. It’s similar to the brazen ‘tattoo-art’, but slightly looser and with a main person. The lake plays a huge role in all the cards, so blue is an important returning color. I would say that reds, greens and yellows are obvious too. The card stock is quite good and the cards are poker-sized, similar to Lenormand – shuffling is a piece of cake.

Discover soul path
The deck comes in a very cute (yep, sorry, it is) turquoise colored fitting baggie with off white crochet, on the top a paper circular copyright ‘notice’ “The Wyrd of Sarah Howard. By Wooden Eyes” and the back shows a drawn eye. Again on paper. The crocheted doily or sometimes lace on the bag are found items and represent, according to its creator, Sarah Howard’s time-passing ladies ‘accomplishments’ as she daydreams of exotic foreign lands, but also the ‘Wyrd’- or web woven as she reaches, connects and touches with others on her soul path. 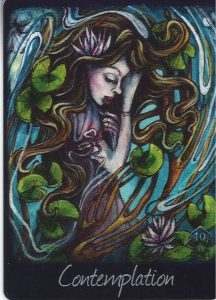 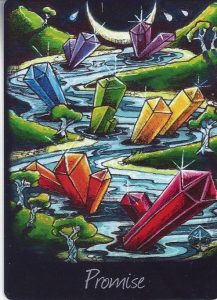 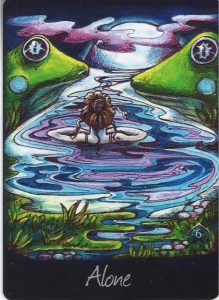 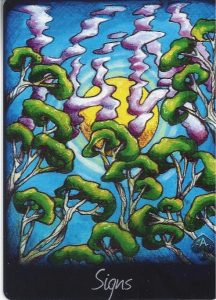 What the deck doesn’t come with, is a LWB. Angus-West thought of doing a true companion but time constraints due to the book for Bonefire and her newest project* made sure there won’t be one. And in a way that is fitting too, because the cards alone give you plenty info. If you really want something like an explanation, don’t worry: you still get that. About 8 black cards will offer you Sarah’s poetic story and give you a. keyword per cards and b. a thought on it. In my opinion those are all rather short and they won’t give you ‘meanings’. This is not a deck that says: this is how you read me. No, this is a deck that says: I give you many options, now it is up to you.

Systemic deck?
That brings me back to the possible system with The Wyrd of Sarah Howard. At first sight I thought the imagery related to the minor arcana, the playing card inserts to cartomancy. The keywords were part of her creative thought process and would give the cards their typical oracle-working style. But when working with it I saw that while the minor arcana RWS-style was referenced a lot, there definitely were huge differences at some point too. In other words: the oracle has its own specific style. Also, the inserts could tell a different story. Honestly: I was a bit stuck. Should I read Lenormand-style, Cartomancy, Oracular? So, what is a reviewer to do then? You ask the designer if there’s a way The Wyrd of Sarah Howard *should* be read! 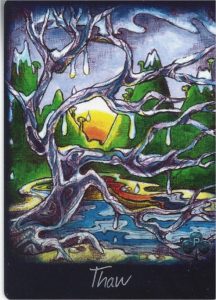 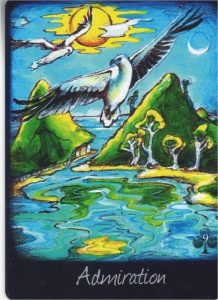 The answer: “It really correlates to the minor arcana. The energies of the card were held fast as I made my sketches. I have yet to find a moment since beginning my tarot journey to ever expand in to other reading systems. I understand the minors and hoped if I worked from my knowledge of these cards, modified by the intention of the image, I could produce a balanced deck from a sure framework. I chose a keyword to sum up (she initially had long quirky titles, now named on the black ‘lwb’ cards), some of which are perhaps a little obscure of the image and perhaps do not exactly match another’s understanding of a particular minor arcana, without the context, ” according to Angus-West. The 10 of Diamonds, Mystery, correlates to the Ten of Pentacles where she brought out the part of ancestry, the learning about ones past. So it is a more soulful and spirtual sense of the minors. Knowing RWS will help, but if you’re more fond of other systems like TdM you might like the fact you need to dive into the images to get the true story.

Playing card inserts
The playing card attributions were put on the cards to try and focus the tarot-minded reader should they be lost at sea with an oracle with simple card titles. When she herself uses Sarah Howard, Gabi uses the language of tarot and engages with the images. Therefore, the Playing card attributions may be used to add in the way that you are used to or you can ignore them. It is my experience, despite not having used the inserts a whole lot, that what you can see on Lenormand cards can very well be strengthening the message or give you alternatives. But I would not be surprised, if you’re doing Cartomancy, you might be a step ahead ;-). “It is neither a Lenormand deck, nor based on knowledge of reading playing cards. It was simply divided into suits to related to the suits known in tarot. So more of a tarot, but making no claims to being a tarot,” so says Angus-West. 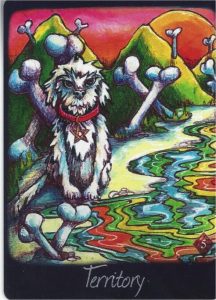 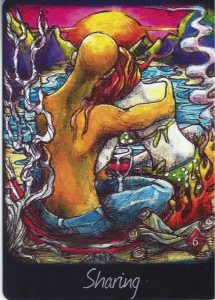 The Oracle The Wyrd of Sarah Howard is an oracle, but neither and nor as well. There is definitely a point to make it is a hybrid of sorts. I like the title meta-oracle. Like said before: it is in its own little domain and you are the one going on a journey with her to find out how to get her to speak to you. Her story says she is a bit of a timid friend. I am not sure I agree. It is indeed not one to scream at you, be snobby, pushy or blunt. But for me she felt like that type of friend who gives you just enough commentary and honesty to let you come to the right conclusion on your own, all the while having one of her eyebrows cocked. If you know what I mean. Sweet, but not a bullshitter. It always sounds a little schizo talking about decks as people or personalities. We are talking about paper and ink after all. But with Sarah it truly felt that way and I believe that is exactly why her designer created her in the first place.

Conclusion
This whole meta-hybrid-thing can either turn you off or make you more interested. The Wyrd of Sarah Howard definitely has her own quirky voice. The cards in the Oracle The Wyrd of Sarah Howard can be silly, thought-provoking, scary or sometimes mysterious. You’ll definitely see a lot of repetition in the scenery too, because you have to remember you’re working with the area of the lake and a main person. But if there ever was a time to have a deck speak to you, why not when there is actually a character to do that with? Who knows, she might actually be real :D.

I think The Wyrd of Sarah Howard offers enough to be able to speak to a larger audience. It takes some getting used to if you want to use all the attributes, but it isn’t an all or nothing deck. It is a deck of choice in the broadest sense of the word. It’s nice, sassy and ‘out there’. The little baggy that comes with it is sweet and cute, just like Sarah. But I think the lady packs a punch, and if you’re not careful you won’t see it coming.

* Angus-West is currently working on the Blue House Tarot, a deck inspired by the life and works of Frida kahlo and her partner Diego.
**There are around 15 copies of the 100 Sarah Howard decks remaining by the time I was writing this. The designer will sell only a few more. There are no particular plans for a second edition. If you want one, you better hurry and contact her via bonefire(at)hotmail.com

The Wyrd of Sarah Howard Oracle 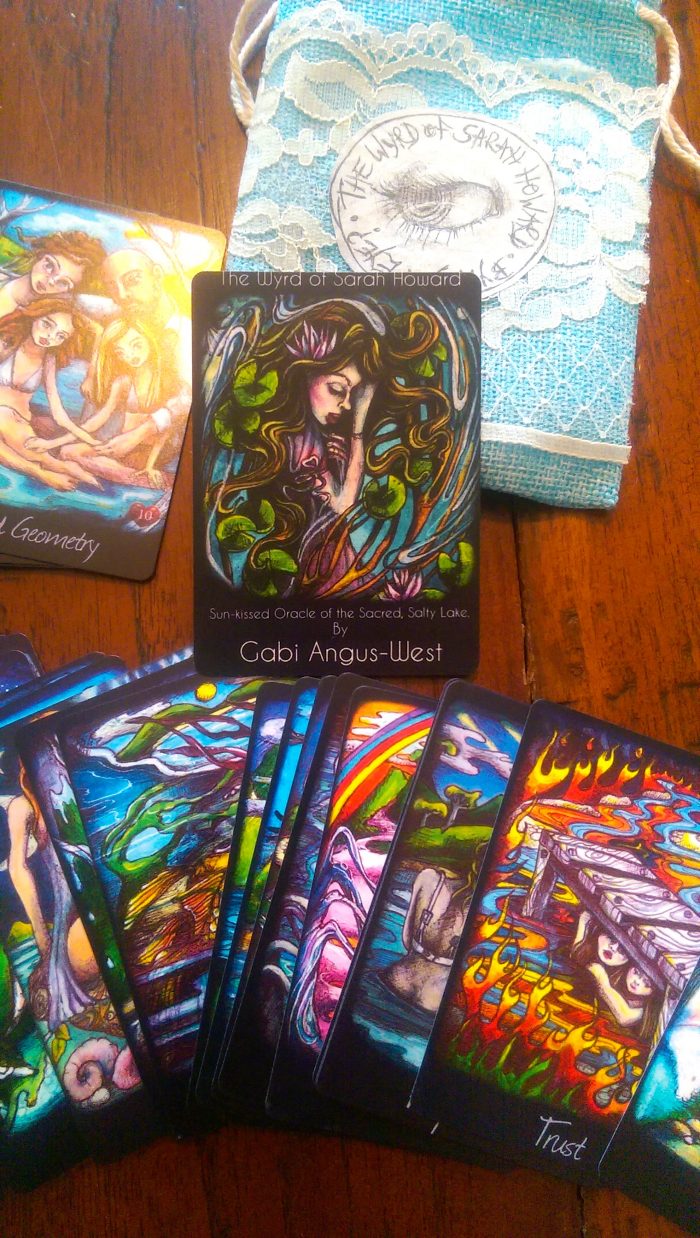