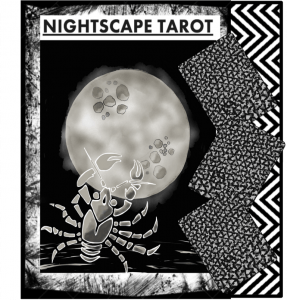 While researching on new(s) items for The Queen’s Sword I see a lot of decks, but I can never fully suppress that tinge of excitement when I discover work that I like and think others will too. The Nightscape Tarot is such a work. It is still in its early stages and made by a couple: designer Molly Greenlee and tarot reader and soon PhD Jungian Depth Psychology Dylan Hoffman. An interview with Greenlee about everything Nightscape and of course a sneak peek of the images.

Your deck doesn’t seem like the ‘garden variety’ tarot. Are there going to be deviations from known tarot systems?

The Nightscape Tarot deck will include the standard 78 images, major and minor cards. They will have standard numbering (8 for Strength- TQS) and use the standard suits. Outside of that structure, however, you’ll see that the cards are quite playful and have a very contemporary illustrative style. 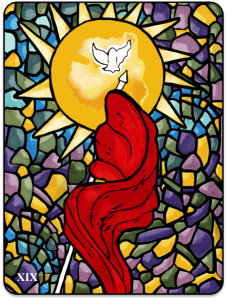 The Sun card for the Nightscape Tarot

Who does what for the Nightscape Tarot?

I consider ‘Nightscape’ a collaborative project because Dylan introduced me to the world of tarot. He gave me my first reading with Tricia Newell’s Mythic Tarot deck and it blew my mind. Reading each other’s cards has become part of our routine as a couple ever since. This project closely coincides with the trajectory of our relationship. I come up with the images, but each card generates a conversation between us. Dylan makes suggestions and we come up with each card’s written description (also found on the website) together.

With the Nightscape Tarot we’re attempting to understand the patterns of the psyche.

What has inspired you, tarot wise or in general as an artist?

There are a couple of decks that really inspire me, including the Morgan-Greer, Wild Unknown, Fountain deck and original Marseilles images. We have a growing collection of decks at our house.
The name ‘Nightscape Tarot’ came about sort of organically. We always keep our cards upright for readings- it’s just a mutual preference- so for this reason it was especially important to me that each card maintain a balance between possible ‘positive’ and ‘negative’ interpretations. The strong use of contrasting blacks and whites, light and shadow, arose from this original intent.

Several images of the Nightscape Tarot

Attempting to create a ‘balanced aesthetic’ gets at the heart of why tarot is a helpful practice. By delving into the potential meanings of the cards, both positive and negative, superficial and profound, we’re attempting to understand the patterns of the psyche. The unconscious at work in our lives. The archetypal images found in tarot, each with a differing degree of resonating symbolism, a differing degree of familiarity and uniqueness, help us unravel these elements so we’re able to approach our lives with a little more grounding, with a little more conscious intent.

So, what do you hope the Nightscape Tarot brings to the tarot table?

My hope is that the strong black backgrounds and the figures constantly emerging from darkness in my cards help tarot enthusiasts in the pursuit to not only celebrate, but also unlock some of the mystery of our daily lives. Why do we operate the way we do? What exists beyond appearances, pulling the strings this way and that? 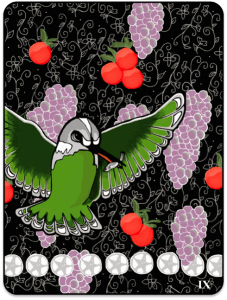 The 9 of Pentacles from the Nightscape Tarot

How far along is the Nightscape tarot?

I’ve completed about 25 images so far, so I have quite a way to go. As the images come together, it’s been interesting to see elements of my own life insert themselves: my friend’s distinctive hairstyle that made its way onto the Empress card, a cowboy hat in the Knight of Wands, my remarkable and wholly unintended resemblance to the figure in the Two of Swords… As much as I try and keep the images universally applicable, my own experience inevitably asserts itself.

Is there is a potential release date or pre-order system?

A realistic release date would likely be May 2017. I would like to finish sooner, but I work full-time in public education so my pace for completing cards has been steady but slow.
It will be a few months before I consider adding a pre-order option. However, Dylan is available for tarot readings and online group lessons in Jungian psychology if people would like to contribute/participate in the project in that way.